This week marks 35 years since the United States legacy carrier, Frontier Airlines, ceased operations. Thousands of passengers were left stranded after the carrier’s parent shut down the operation, leading to bankruptcy on August 28th, 1986. 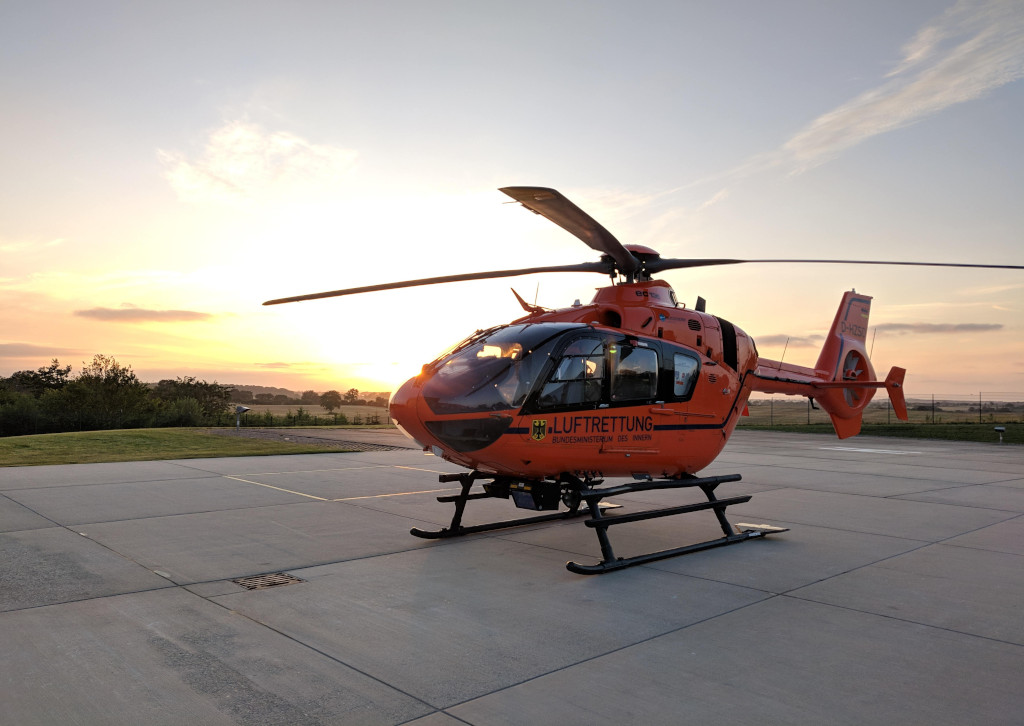 Frontier Airlines was a commercial aviation powerhouse for much of the second half of the 20th century. Photo: Getty Images

Frontier Airlines is still a familiar name in US aviation. The title can be seen on the livery of an ultra-low-cost carrier’s aircraft. There have been various carriers adopting the monicker over the decades. The current low-cost outfit based in Denver, Colorado, was launched in 1994 by two workers of the veteran Frontier Airlines that operated from 1950 for 36 years.

The preceding airline ceased fights eight years before the current operation. Leaving such a legacy on the aviation industry, why did the carrier terminate its services?

The Stapleton International Airport-based company traced its operations back to June 1st, 1950, after a merger between Monarch Airlines, Challenger Airlines, and Arizona Airways.

The firm conducted flights on routes across the Rocky Mountains with a dozen Douglas DC-3 aircraft. It added additional aircraft in the form of the Convair CV-340 and CV-440 before its first decade of operations was complete.

The experimental approach with planes continued into the 1960s, as the company became the first carrier to deploy the Convair 580 Allison turboprop edition of the Convair airliner. Airline Files notes that this aircraft became the staple of the fleet until the service entry of the Boeing 737-200. The de Havilland Canada DHC-6 would also support routes to smaller markets. 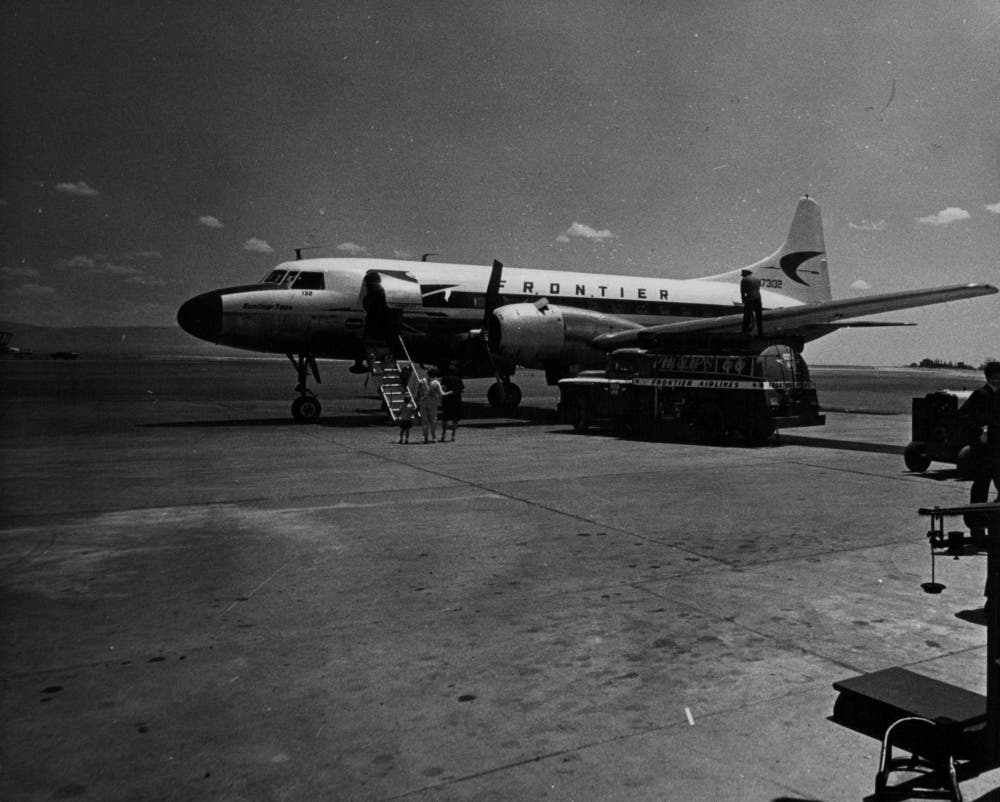 Frontier Airlines expanded with nonstop flights to the likes of Albuquerque with its Convair units. Photo: Getty Images

Focus cities for Frontier included Dallas/Fort Worth, Kansas City, Salt Lake City, and St. Louis. The expansion to Fort Worth was helped by the purchase of Central Airlines in October 1967, which also bolstered the airline’s fleet further.

The carrier’s growth was also supported by clever deals with airlines, such as its interchange flight agreement with Huges Airwest, which helped connect passengers between the likes of Burbank and Orange Country with Denver. 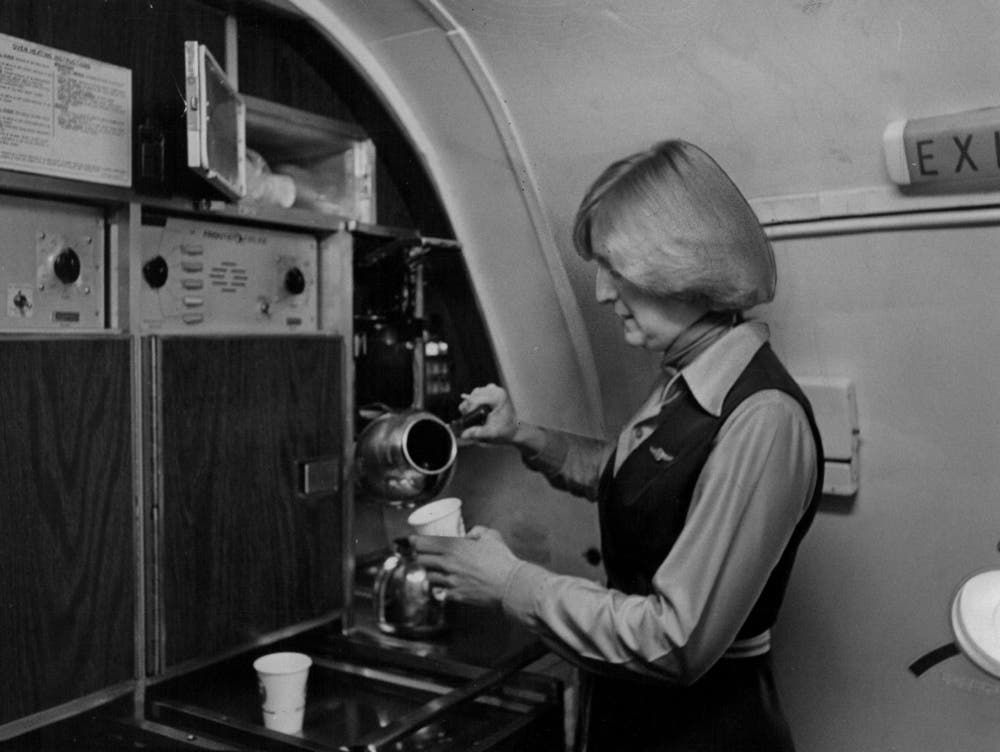 A major turning point for Frontier was in February 1980. This was when the company’s president, Al Feldman left to become chief executive of Continental Airlines. This move would prove to be a catalyst in the downward spiral of the airline for the remainder of the decade.

Glen Ryan took the helm, and in the next few years, staff members started to accept lower pay and fewer benefits to keep the operation going. In an effort to shake things up, the business launched a low-cost subsidiary, Frontier Horizon. However, this branch was heavily opposed by workers, and it lasted for over a year between January 1984 and April 1985. Notably, it was purchased by Skybus Airlines.

The employees’ union coalition tried to steer the airline in the right direction but did not succeed. Thus, in the fall of 1985, People Express Airlines purchased Frontier for $300 million. This low-cost airline was only launched in 1981 and was based in Newark, New Jersey, but saw rapid expansion by launching in the new market climate.

The new parent ran its acquisition as a separate entity. Regardless, losses continued to mount for Frontier.

There were serious reports of Frontier being sold to United Airlines for as much as $146 million. Yet, there were disagreements. Importantly Frontier’s 550 unionized flight crew would have to accept lower pay than what was given at the time to United’s pilots. 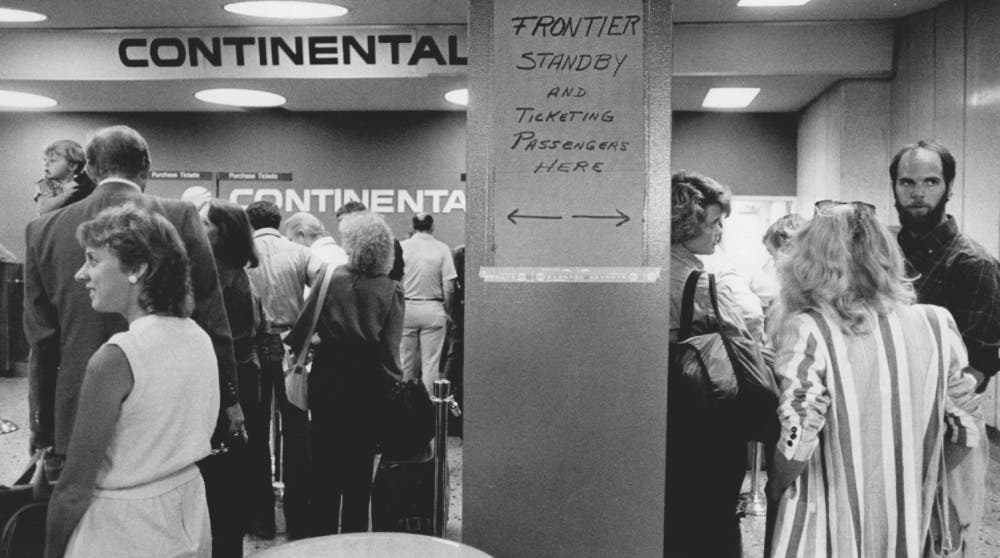 There was havoc on August 24th, 1986, as People Express shut down Frontier Airlines’ services at Stapleton International. Photo; Getty Images

In the end, People Express CEO Donald C. Burr shared that no parties were willing to make an offer for Frontier “as a whole.” He added that Frontier was the victim of ”an unresponsive and inflexible pilot union.”

Subsequently, Frontier filed for Chapter 11 bankruptcy protection. People Express hoped to sort out the serious financial mess that Frontier was in with this move.

“United had agreed to buy Frontier for $146 million. It did not do so but did acquire some of Frontier’s prime assets such as gates, slots and hangars at its hub at Stapleton International airport. Pessimistic Outlook Under Chapter 11, a company is protected from its creditors while it tries to work out a plan to restore its health. But some airline analysts said that with the transfer of those assets to United and considering Frontier’s debts, there is little left to reorganize at Frontier,” The New York Times reported on August 29th, 1986.

“The filing will end much of the financial drain that People Express suffered. The low-cost carrier expanded substantially but imprudently when it bought Frontier last November. Frontier has had losses of about $10 million a month. It was the drain on People’s cash that caused the parent to shut the airline last Sunday and send home its 4,700 workers and ground its fleet of 42 planes.”

The rest is history 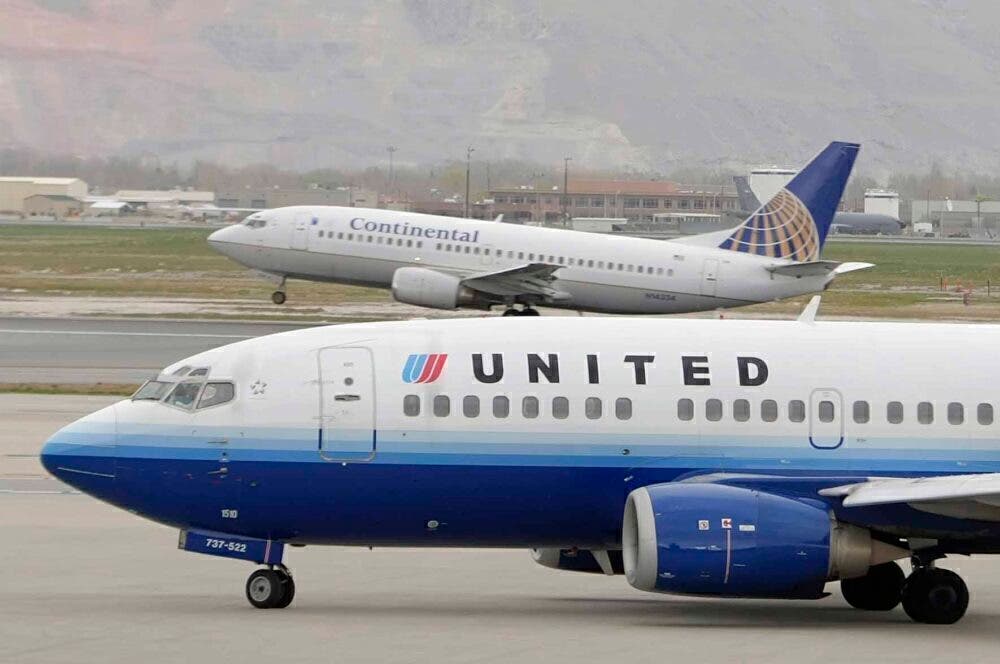 Continental Airlines would go on to merge with United Airlines in 2012. Photo: Getty Images

Altogether, it’s been over three decades since this historic incarnation of Frontier stopped flying. Nonetheless, there were undoubtedly countless memories formed for those passengers that flew with the airline up until the summer of 1986. The airline is still talked about by many today, representing a crucial time in aviation history.

What are your overall thoughts about Frontier Airlines’ operations during its time in action? Did you ever get to fly with the carrier? If so, share your experiences with us. Let us know what you think of the operator and its history in the comment section.