The E175-E2 is the last remaining sibling of the popular E2 family. In its first iteration, as both the E175 and the E170, it was one of Embraer’s best sellers. But the timeline for the new generation makeover keeps slipping; we caught up with Embraer’s VP of Sales and Marketing EMEA, Cesar Pereira, for an update on the program.

The E175-E2 is still several years away from entry into service. Photo: Embraer

The E2 family is fast becoming one of the best things Embraer ever did. Customers of the E190-E2 and the E195-E2 are happy – more than happy – with the performance of these new generation jets. But the family was supposed to be a trio, with a smaller sibling providing the bottom end capacity for the regional market.

“We have now two aircraft certified, flying and delivered – the E190-E2 and the E195-E2. And we are still working on developing the E175-E2, the smaller member of the family. So now, 2024 is the date for these aircraft.”

Previously, Embraer had been targeting bringing the E175-E2 to market as soon as later this year. But amid the devastation of the COVID crisis in 2020, the company announced a pushed back timeline of 2023. Earlier this year, the Brazilian planemaker further delayed the timeline, noting that it would be 2024 before the type was introduced. 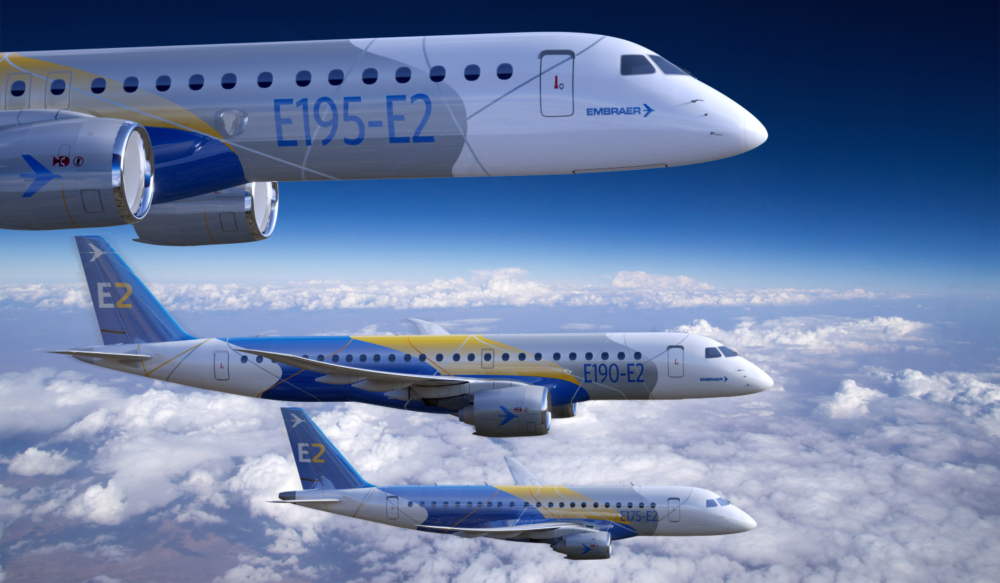 The E175-E2 will be the smallest member of the E2 family. Photo: Embraer

At the time, the company cited the current market conditions as reason for the E175-E2s delay. However, there was also some acknowledgment that the restrictive scope clause in the USA would not be changing any time soon, which would limit the penetration of an 80 – 90 seat jet of this weight in the market.

The refinements that have come with the E2 generation of Embraer’s commercial aircraft have made them hugely popular with regional operators. Quieter, more efficient, and more comfortable for passengers, the orders for the E190 and E195 have been pouring in. Although the refresh of the E175 remains on the cards, Pereira is under no illusion that Embraer’s best aircraft are already out there. He said,

“Helvetic has the 190 and the 195, and those I believe will be the two aircraft that will be very, very successful. Gamechangers.” 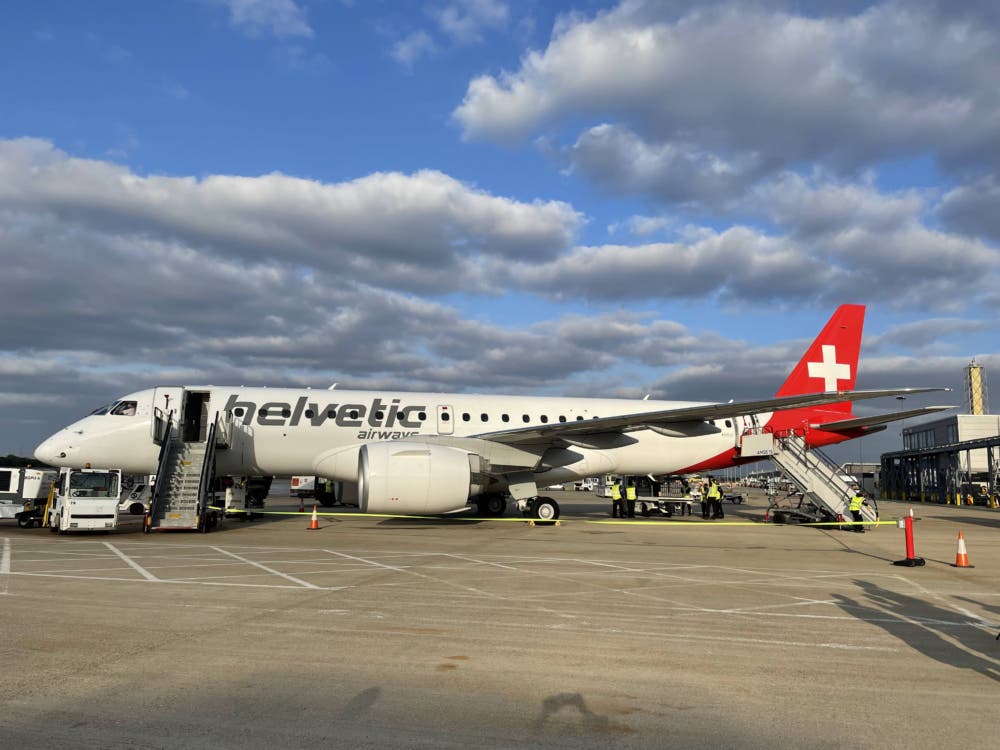 Helvetic is the first and only operator of both E2 jets right now. Photo: Joanna Bailey | Simple FlyingStay informed:Sign up for our daily and weekly aviation news digests.

For now, Embraer has chosen to play the waiting game, hoping that changes in the scope clause will make the E175-E2 a more viable proposition in the US. However, when the E175-E2 does appear, it will have new competition to fend off; competition that comes from its own manufacturer. Will the turboprop damage sales for the E175-E2? Photo: Embraer

Embraer is slowly revealing details of its new, reimagined commercial turboprop, which is set to enter the market in 2027. Based on the fuselage of the E2, the planemaker promises a quieter, more comfortable prop, seating 70 to 90 passengers and capable of efficient flying on the shorter regional routes. Does the development of this aircraft negate the need for the E175-E2? Pereira says not,

“There is a market for both. There is some crossover in terms of capacity, but the applicability is a bit different. In the same way as we don’t see the E175-E2 taking market share from ATR, for example, we wouldn’t see it competing with the turboprop to a major extent.”

One of the most interesting highlights of the information released on the turboprop to date is the idea that it could replace 50-seater regional jets. Pre-COVID, many US airlines were looking to replace their regional jets because passengers did not enjoy them – that’s a problem many operators have yet to solve. If they could replace these with a jet-like experience with an E2 fuselage and all the economic benefits of a turboprop, it would almost be a no-brainer. 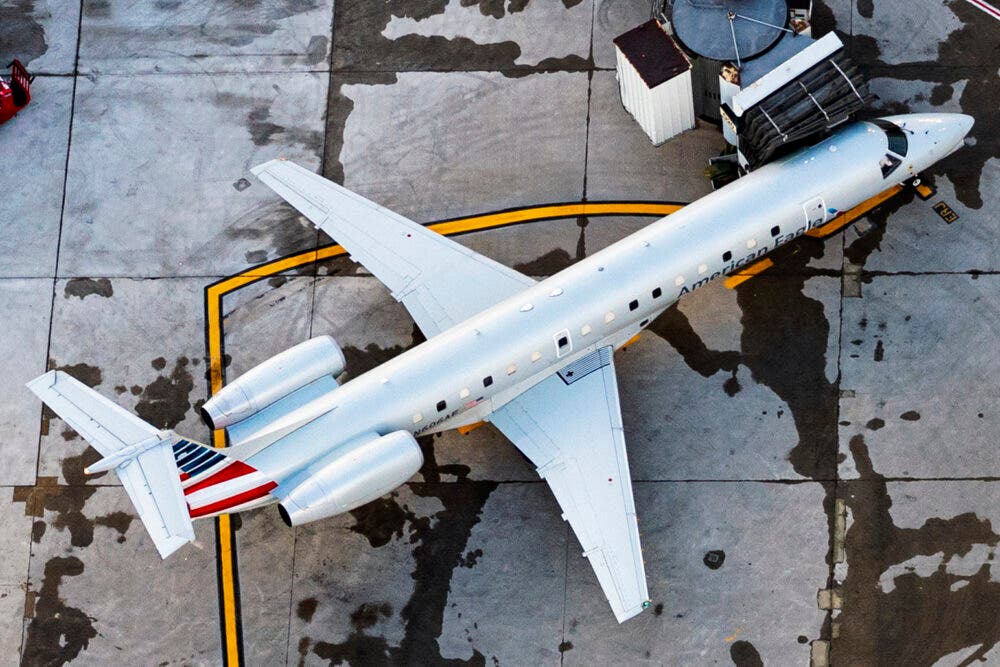 US airlines are keen to move away from their 50-seat regional jets. Photo: Vincenzo Pace | Simple Flying

The turboprop is likely to arrive in either a 70 or 90 seat configuration, suggesting that the 50-seat version would employ a sizeable premium cabin. This would let US airlines retain seamless service from mainline fleet to regional feeder flights, enhancing customer experience.

From the outside looking in, Embraer appears to be hedging its bets. If the scope clause is redefined pre-2024, we could see the E175-E2 becoming a bestselling in the United States. If it is not, then the turboprop will be just a couple of years behind, ready to snag a decent level of market share. But if the scope clause looks set to remain in place long term, will Embraer even launch the E175-E2, with all the development costs that brings and the world’s biggest regional marketplace closed off to the jet?

What do you think? Have your say in the comments.

Did you miss our previous article…
https://www.revlx.co/?p=306