A flight operated by the Russian all-Superjet budget airline known as Azimuth was involved in an animal strike on Monday, November 1st. The aircraft, which had flown from Krasnodar, was landing in Pskov when it collided with a deer. This resulted in damage to the aircraft and likely injuries for the animal.

News of the incident comes via The Aviation Herald, which reported that a Sukhoi Superjet 100-95 operated by Azimuth had collided with a deer upon landing in Pskov after a flight from Krasnodar in Russia. The incident took place at Pskov airport’s runway 19. Onboard the Superjet 100-95 registered RA-89180 were 96 passengers and six crew members.

It was reported that the aircraft rolled out without further incident but that it had sustained damage to its right wing and engine – a PowerJet SaM146. Video of the damage, embedded below, sadly shows blood splatter across the lower-right side of the aircraft and around the landing gear. A portion of the lower-rear right-engine cover was penetrated and pulled back as well. While the video does not show the animal, viewer discretion is advised.

Azimuth Airlines is a Russian budget carrier that operates a single-type fleet of 15 Russian-built Sukhoi Superjet 100-95 aircraft. At the time of this article’s publication, its average fleet age is just over three and a half years old.

The flight to which this incident is attached was designated A4-101. Unfortunately, flight tracking data for the November 1st service appears to be unavailable. Although it sounds like November 1st’s service was a direct flight from Krasnodar to Pskov, October 31st data shows that A4-101 flew from between the two cities via Moscow. 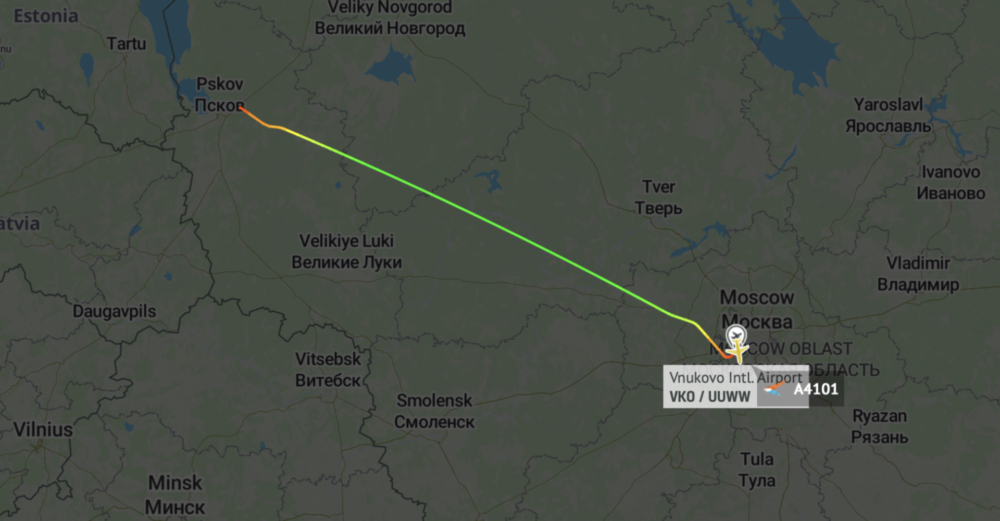 Pictured here is the October 31st flight path, the most recent data available for flight A4-101. For this particular flight, it appears that Azimuth flew from Krasnodar to Moscow and then Moscow to Pskov.  Photo: RadarBox.com

Referred to as “one of the oldest cities in Russia,” Pskov is a relatively small city close to the Russia-Estonia border. The nearest major Estonian city is Tartu- some 150km west by road.

With Pskov Airport and its runway surrounded by forests and fields, it’s not entirely surprising that an animal encounter would occur at this relatively quiet airport. Indeed, if data is accurate, the facility receives at most two flights per day. However, there can also be multi-day stretches where no flights are scheduled.

Simple Flying has reported on several other wildlife strikes and animal encounters in the past, including the following:

In August 2020, an S7 Airlines A320neo spotted a grizzly on the runway as it approached Magadan (Russia). With enough time to react, the crew initiated a go-around, and the flight landed safely around 20 minutes later.The following month, in September 2020, a Pobeda Boeing 737-800 flying from Moscow to St. Petersburg also had to perform a go-around after a dog was spotted on the runway during the final approach.Two months later, in November of 2020, another bear in Yakutat (Alaska) was not so lucky. In this incident, an Alaska Airlines Boeing 737-700 performing a landing struck and killed a bear.

Are animal strikes or wildlife encounters an occasional occurrence in the area you live? Let us know by leaving a comment.