Modern jets, such as the 787 and A350, have seen a switch to composite materials for fuselage construction. This seems set to stay as the way forward for new aircraft designs. There are challenges, but the lower weight offering significant improvements in efficiency and operating cost. 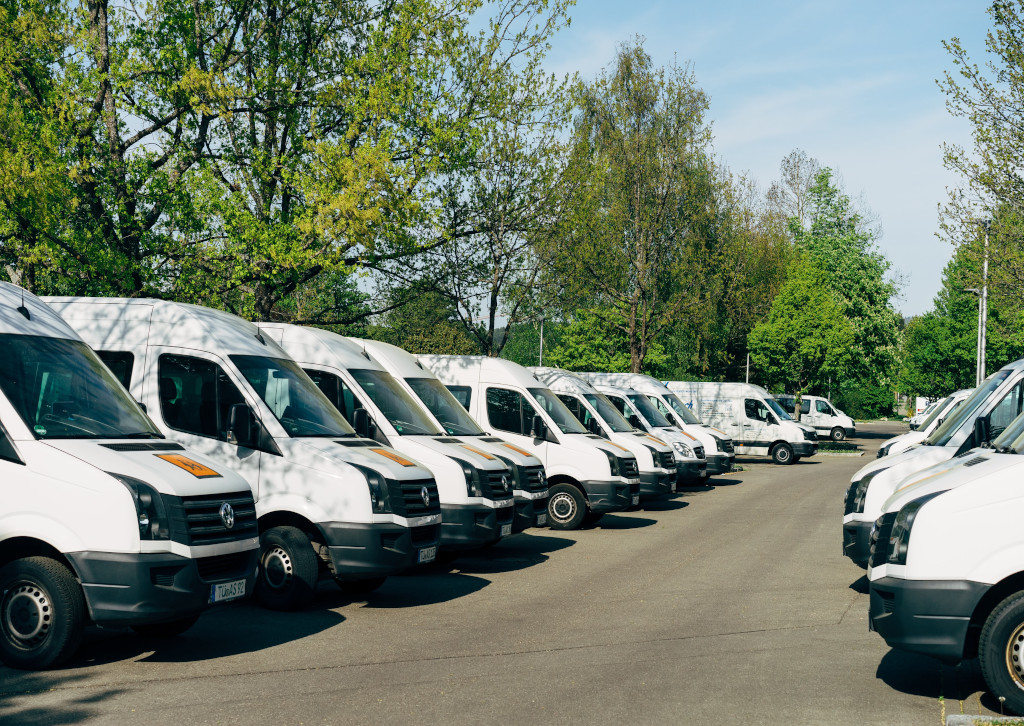 Aircraft have not always been made of metal. Many early aircraft used wood and fabric. And not just small aircraft such as early biplanes – the wooden Howard Hughes H4, known as the ‘Spruce Goose‘ was one of the largest aircraft ever built. It flew once but never entered service – due to the end of the war, though, not its wooden construction! 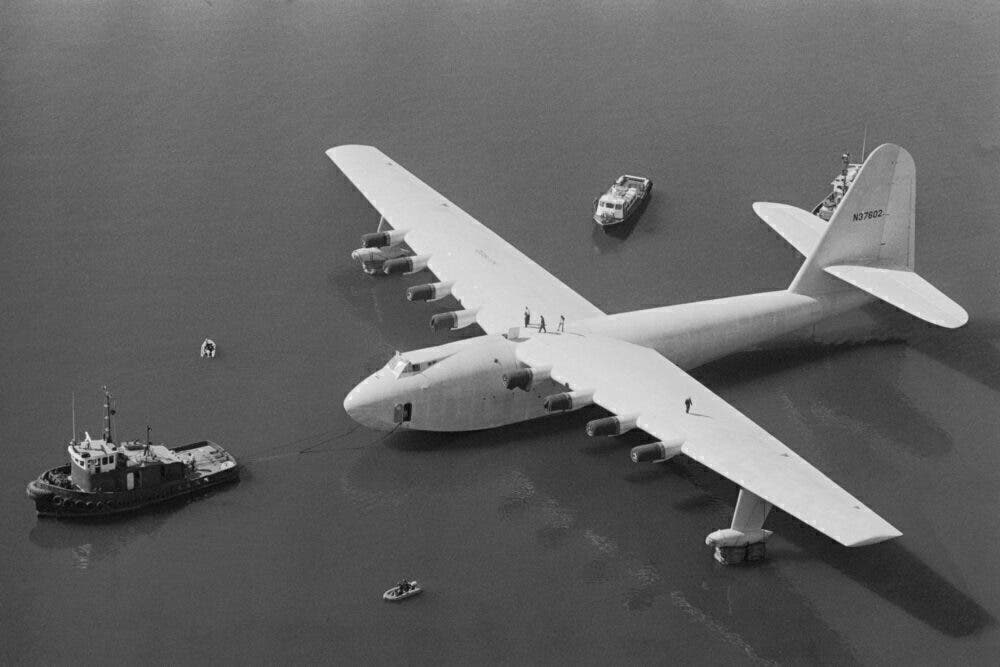 Wood was a practical material. It was low-cost and very low weight. But it was not strong enough for very high-speed flight. As speeds increased, and certainly as jet engines were introduced, metal became the better option.

Aluminum was the best choice. It is durable, light, and relatively inexpensive. Titanium, in fact, is even better but too expensive. The compromise is to use aluminum alloys to reduce the issues of stress fatigue and corrosion. Such aluminum alloys have formed the basis of all jet aircraft fuselages until recently. Small amounts of other metals (such as steel or iron) can be used in construction, but on their own are too heavy and would stress at high temperatures. 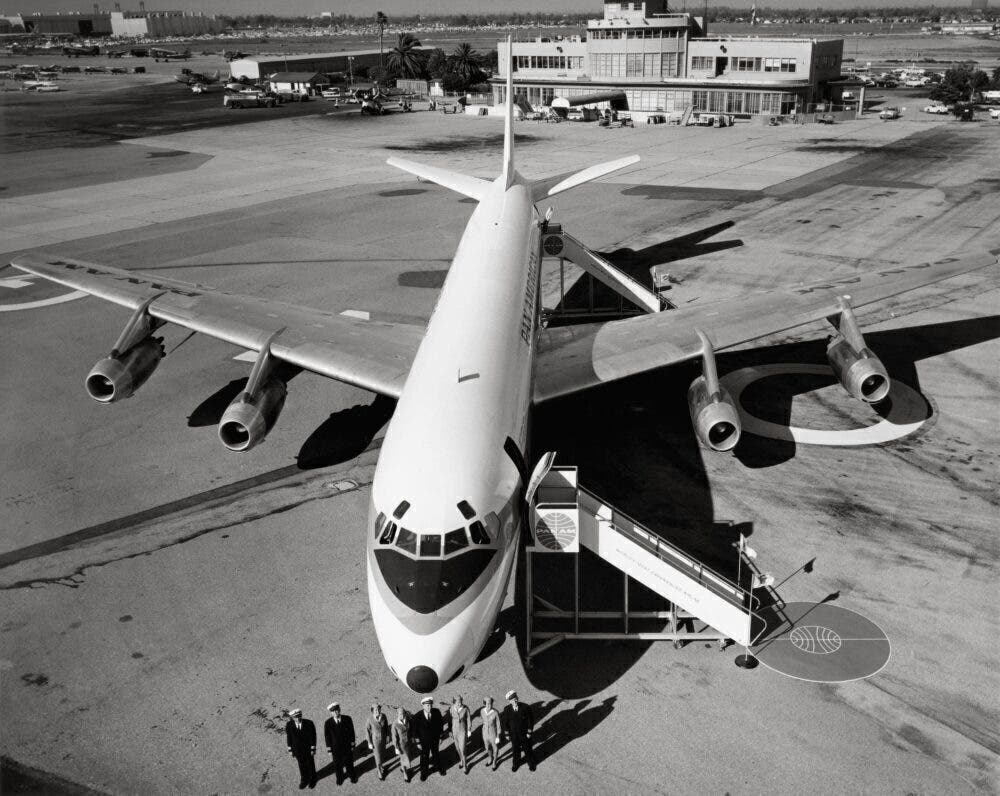 Jets have long been constructed from majority aluminum alloy. Photo: Getty ImagesStay informed:Sign up for our daily and weekly aviation news digests.

Many modern aircraft, most notably the Boing 787 and Airbus A350, have shifted to composite materials for construction. This follows the trend towards more efficient, lower cost, and lower emissions aircraft operation in recent years. These are the first two to have a significant composite construction

Earlier aircraft had already started to move this way, however. The A380, for example, is approximately 20% composite, and the 777 around 12%. Interestingly, the new 777X will retain an aluminum fuselage, as it is based on upgrading the 777.

Composite refers to construction from two or more different materials that, when combined, perform better than the elements by themselves. For the 787, around 50% of the materials used are carbon fiber reinforced plastic (CRFP) and other composites. Aluminum still accounts for 20%, titanium 15%, and steel 10%. 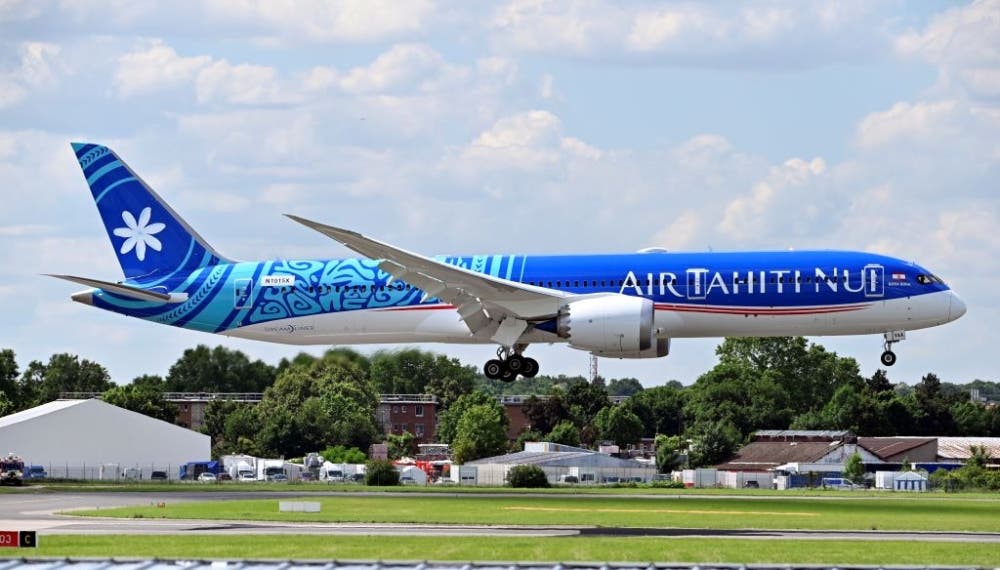 The 787 fuselage is around 50% carbon fiber and composites. Photo: Getty Images

Airbus also makes use of CFRP in the A350. The manufacturer provides a good description of how it uses CRFP on its website:

“In CFRP production, thousands of microscopically thin carbon threads are bundled together to make each fibre, which joins others in a matrix held together by a robust resin to achieve the required level of rigidity. The composite component is produced in precisely shaped sheets laid atop each other and then bonded, typically using heat and pressure in an oven called an autoclave, resulting in a high-quality composite,”

Much of the credit for the move to composites is due to Boeing. It chose to follow the success of the 777 (as the best-selling widebody to date) with a new clean-sheet aircraft design in the 787. This was lower capacity than the 777 and moved Boeing into the unproven market for a composite airframe. Airlines reacted positively, though. So much so that Airbus chose to revise its plans for the A350 and also design a new clean-sheet composite widebody with the A350XWB (previously, it was planning an upgrade based on the A330). 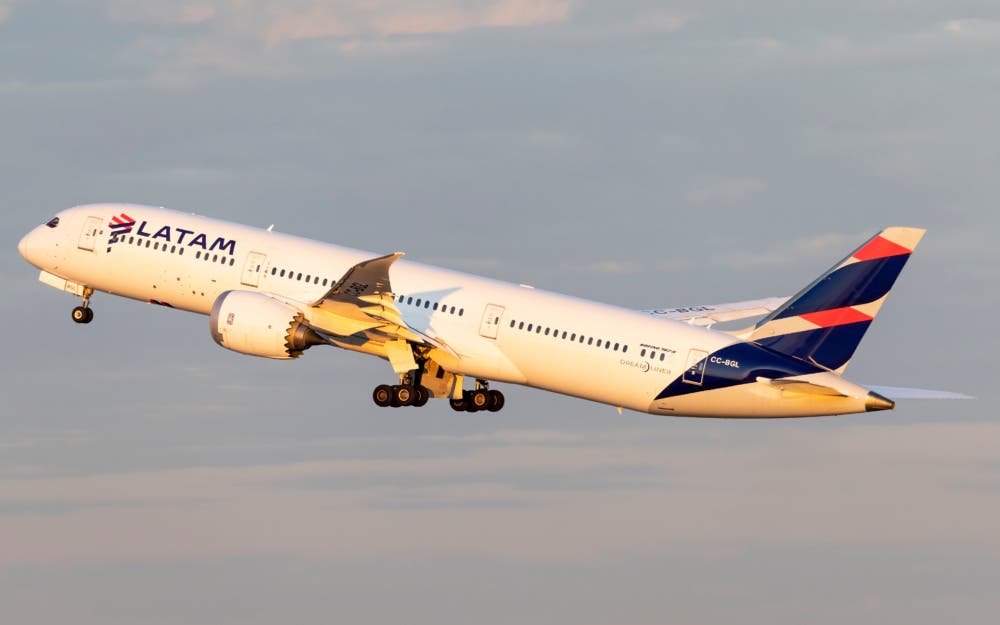 The main advantage is a weight reduction, leading to lower fuel consumption, emissions, and ultimately cost per seat for airlines. Such materials are also less susceptible to corrosion and fatigue, reducing maintenance time and cost for airlines.

Composite structures can be molded into any shape. This has allowed separate entire fuselage ‘barrel’ sections to be made in different locations, rather than aluminum sheets that needed to be bolted together. Boeing has used this extensively in its construction of the 787. Fuselage sections are fully assembled in different locations (including Italy and Japan) and then flown to Boeing’s US factories for final assembly, using the Dreamlifter aircraft. 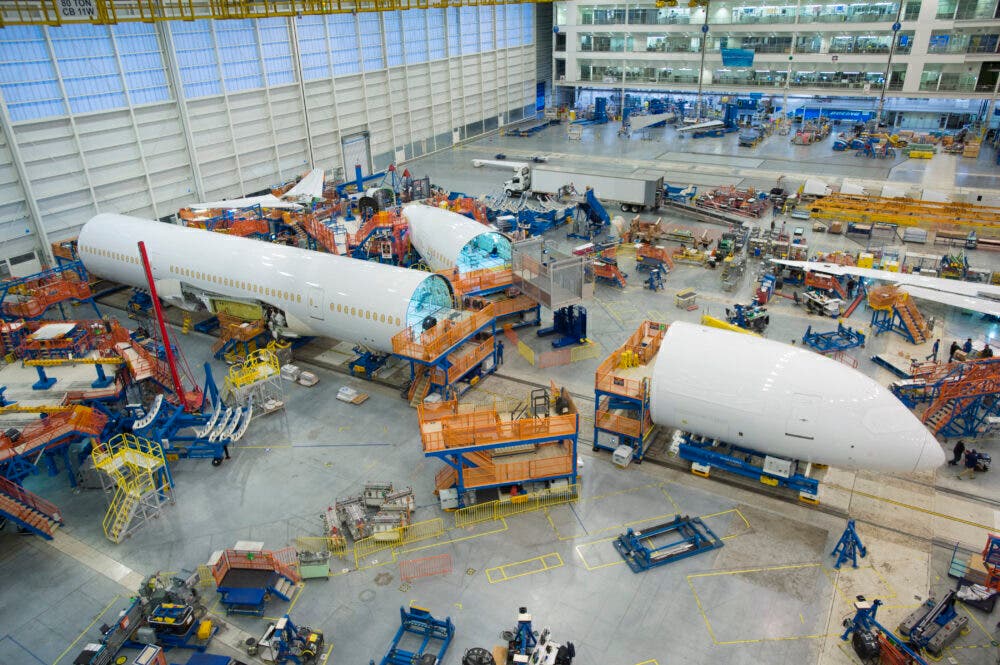 Another difference you will notice with composite is larger windows. With the fuselage less resistant to fatigue, these can be increased in size. The 787 has the largest passenger windows of any passenger jet, and as composite use advances, we could see bigger. 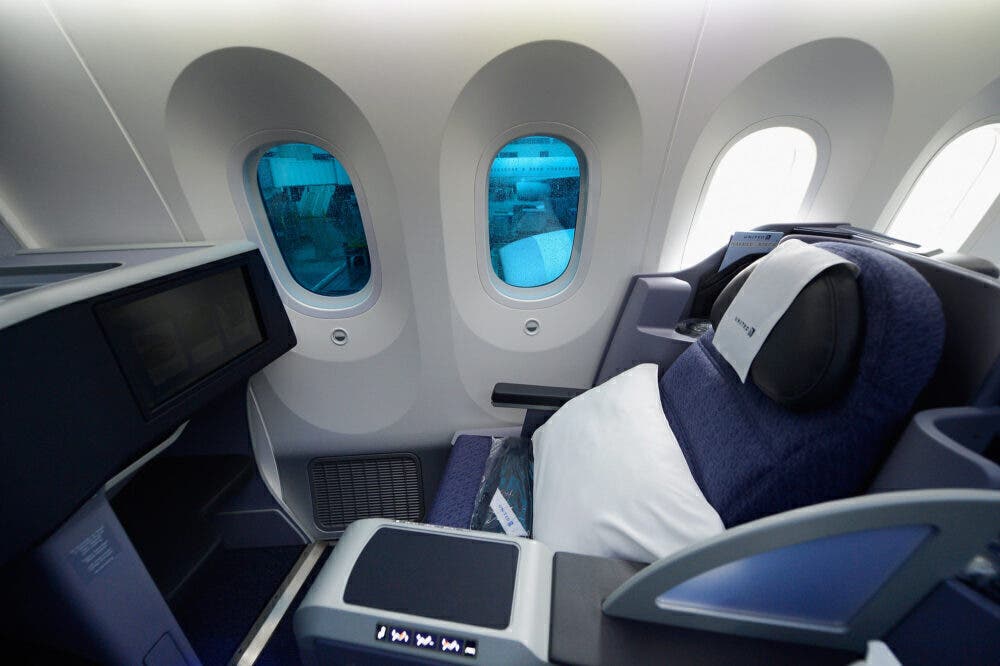 The 787 has the largest windows of any current aircraft. Photo: Getty Images

With the move to composites, at least for commercial passenger jets, now well underway, are there are drawbacks? Cost is one, to a certain extent. CFRP components are more expensive to produce than standard metallic parts (this could change as production and use expands). But over time, this can be offset by lower maintenance costs.

There have also been concerns raised about the detection of damage to the fuselage. Impact damage is not as visible or easy to detect as it is on a metal airframe. Proposals from regulators to mitigate this include better training and more monitoring and reporting of potential airframe contacts. Other tests (including optical, electrical, and acoustic) can check for airframe damage.

Another challenge that we could see is with aircraft modification. This has been raised an issue with freighter conversions – cutting a cargo access door in a composite fuselage is more challenging than in an aluminum one. It may be easier for a possible A350 freighter, though, as its fuselage is constructed from composite panels rather than complete barrel sections. 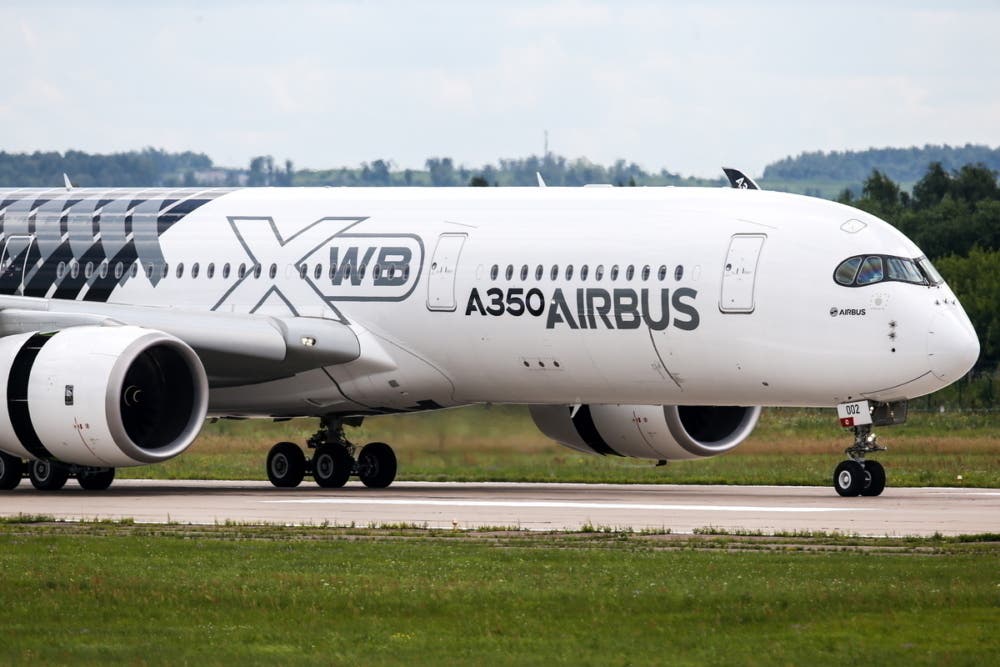 An A350 freighter would likely be based on the A350-900 airframe. Photo: Getty Images

But with the savings in weight and improvement in efficiency, these drawbacks are likely ones that operators are happy with.

Would you like to discuss any more details, or pros and cons, of composite fuselages? Let us know in the comments.